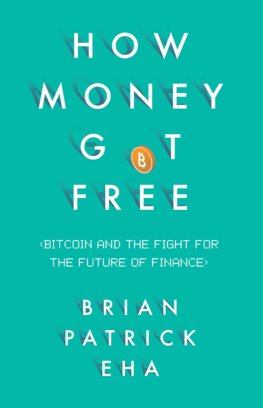 How Money Got Free

In the space of a few years, Bitcoin has gone from an idea ignored or maligned by almost everyone to an asset with a market cap of more than $12 billion. Venture capital firms, Goldman Sachs, the New York Stock Exchange, and billionaires such as Richard Branson and Peter Thiel have invested more than $1 billion in companies built on this groundbreaking technology. Bill Gates has even declared it ‘better than currency’.

But can its early promise endure? Or will the next evolution of money be neutered as it goes mainstream? The pioneers of Bitcoin were twenty-first-century outlaws – cryptographers, hackers, Free Staters, ex-cons and drug dealers, teenage futurists and self-taught entrepreneurs – armed with a renegade ideology and a grudge against big government and big banks. Now those same institutions are threatening to co-opt or curtail the impact of digital currency. But the pioneers, some of whom have become millionaires themselves, aren’t going down without a fight. Sweeping and provocative, How Money Got Free reveals how this disruptive technology is shaping the debate around competing ideas of money and liberty, and what that means for our future.