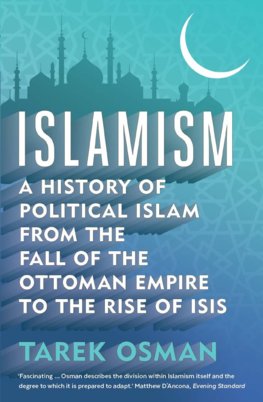 An incisive analysis of Islamist movements in the Middle East A political, social, and cultural battle is currently raging in the Middle East. On one side are the Islamists, those who believe Islam should be the region's primary identity. In opposition are nationalists, secularists, royal families, military establishments, and others who view Islamism as a serious threat to national security, historical identity, and a cohesive society. This provocative, vitally important work explores the development of the largest, most influential Islamic groups in the Middle East over the past century. Tarek Osman examines why political Islam managed to win successive elections and how Islamist groups in various nations have responded after ascending to power. He dissects the alliances that have formed among Islamist factions and against them, addressing the important issues of Islamism's compatibility with modernity, with the region's experiences in the twentieth century, and its impact on social contracts and minorities. He explains what Salafism means, its evolution, and connections to jihadist groups in the Middle East. Osman speculates on what the Islamists' prospects for the future will mean for the region and the rest of the world.

Religion in Human Evolution: From the Paleolithic to the Axial Age