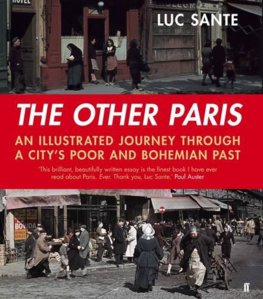 Paris, the City of Light. We think of it as the city of the Eiffel Tower and the Louvre, of white façades, discreet traffic and well-mannered exchanges. But there was another Paris, hidden from view and virtually extinct today - the Paris of the working and criminal classes that shaped the city over the past two centuries.

In the voices of Balzac and Hugo, assorted boulevardiers, barflies, rabble-rousers and tramps, Sante takes the reader on a vivid journey through the seamy underside of Paris: the improvised accommodations of the original bohemians; the flea markets, the rubbish tips, and the hovels.

Featuring over 300 illustrations The Other Paris is a lively tour of labour conditions, prostitution, drinking, crime, and popular entertainment, of the reporters, réaliste singers, pamphleteers, serial novelists, and poets who chronicled their evolution. It upends the story of the French capital, reclaiming the city from the bon vivants and the speculators, and lighting a candle to the works and days of the forgotten poor.

Scots and Catalans: Union and Disunion