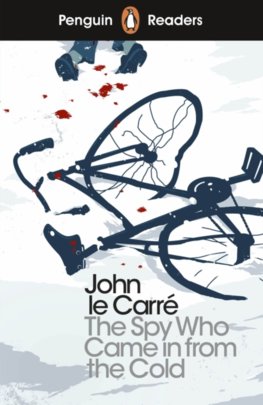 Penguin Reader Level 6: The Spy Who Came in from the Cold

Alec Leamas, a tired, worn out British spymaster, has retired. His boss, however, believes he has one last job in him and sends him to East Germany to spread false information about a powerful East German intelligence officer. Can Agent Leamas end his career of espionage and finally come in from the cold, or will the opportunity to take revenge on old enemies prove irresistible? Penguin Readers is a series of the best new fiction, essential non-fiction and popular classics written for learners of English as a foreign language.

Beautifully illustrated and carefully adapted, the series introduces language learners around the world to the bestselling authors and most compelling content from Penguin Random House. The eight levels of Penguin Readers follow the Common European Framework and include language activities that help readers to develop key skills. The Spy Who Came in from the Cold, a Level 6 Reader, is B1+ in the CEFR framework.

The longer text is made up of sentences with up to four clauses, introducing future continuous, reported questions, third conditional, was going to and ellipsis. A small number of illustrations support the text.

The Spy Who Came in from the Cold

A Murder of Quality

The CEO Next Door