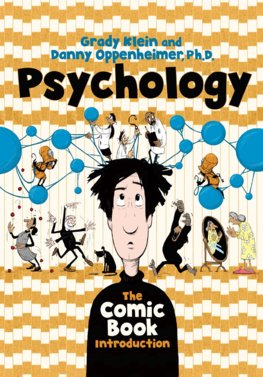 An award-winning animator and cartoonist teams up with a cognitive psychologist to introduce readers to the complex and often comedic world of psychology.

Psychology is the study of our behaviour, of the ways our minds make sense of the world around us. It is a serious, worthy endeavour because we value scientific knowledge, not only for what it tells us about the world, but also for what it reveals about our place in the world. Yet, as cartoonist Grady Klein and psychologist Danny Oppenheimer point out, the study of human experience is naturally comical.

The book itself is split into three sections: "Making Sense of the World", "Making Sense of Ourselves" and "Making Sense of Others". Observations on perception, stress, language, emotions, cognition and more are parcelled out among these three sections and the cartoon treatment brings them to life. The yawn-inducing James-Lange Theory of Emotion, for example, is explained by a gorilla and human who take turns chasing each other. The availability heuristic is illustrated by a man, scared whitless by sharks, meeting a much more common end underneath a toppled vending machine. By the end, it s clear that our experiences blundering through the world are perfect cartoon fodder, and Klein and Oppenheimer are the perfect team to bring that whimsy to its most logical format.

Emotional Success: The Power of Gratitude, Compassion, and Pride

The Life-Changing Power of Sophrology

Head in the Cloud