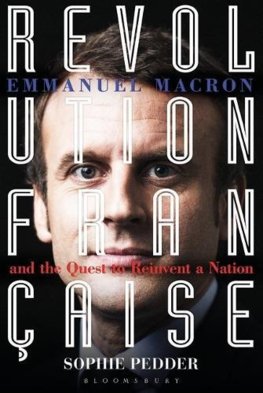 In Revolution Française, Sophie Pedder marks the first anniversary of the election of Frances youngest and most exciting president in modern times, with unique perspective from her time as head of the Economists Paris Bureau. President Emmanuel Macrons vision for France is far more radical than many realise. His remarkable ascent from obscurity to the presidency is both the dramatic story of a personal ambition, and the tale of a wounded once-proud country in deep need of renewal. How did a political novice manage to defy the unwritten rules of the Fifth Republic and secure the presidency at his first attempt? What had happened to France over the previous 20 years that laid the ground for this improbable feat? The task facing Macron is a daunting one. His victory in May 2017 was conditional: he has a mandate until 2022 when the French electorate will judge him by his successes, and his failures. This book chronicles Macrons remarkable rise from independent outsider to the Élysée Palace, but more importantly looks at the bigger picture: Frances slide into self-doubt and seeming reluctance to embrace change, the roots of populism and discontent, the division globalisation has brought to the state, including geographical splits between huge parts of the electorate, the Le Pen factor, and how far it is possible for Macron to reinvent a highly traditional nation which must now embrace the future. Having interviewed all the major players, from Chirac to Le Pen, Macron to Hollande, Sophie Pedder has the depth of knowledge to situate this story in the larger context of France and its place in modern Europe. Chapters include: Le Disrupteur, Destination Élysée, The Roots of Degagisme, Fractured France, The Le Pen Factor, Reinventing a Nation and France in the World. Pedder had a ringside seat to the 2017 campaign, as well as years of experience observing French politics. Her account will be one of the most captivating political books of this year.

Fractured: Why Our Societies Are Coming Apart And How We Put Them Back Together Again

The Address Book : What Street Addresses Reveal about Identity, Race, Wealth and Power