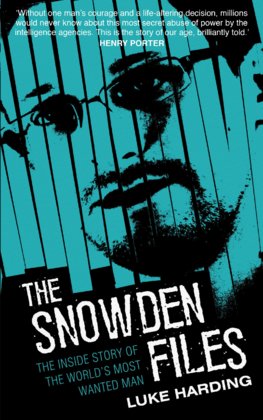 Luke Harding
The Inside Story of the World's Most Wanted Man
11,50 €
Na objednávku

It began with an unsigned email: "I am a senior member of the intelligence community".

What followed was the most spectacular intelligence breach ever, brought about by one extraordinary man. The consequences have shaken the leaders of nations worldwide, from Obama to Cameron, to the presidents of Brazil, France, and Indonesia, and the chancellor of Germany.

Edward Snowden, a young computer genius working for America's National Security Agency, blew the whistle on the way this powerful organisation uses new technology to spy on the entire planet. The spies call it "mastering the internet". Others call it the death of individual privacy.

This is the inside story of Snowden's deeds and the journalists who faced down the pressure from US and British governments to break a remarkable scoop.

Snowden's story reads like a globe-trotting thriller, from the day he left his glamorous girlfriend on the island of Hawaii carrying a hard drive full of secrets, to the weeks of his secret-spilling in Hong Kong, and his battle for asylum. Now stuck in Moscow, a uniquely hunted man, he faces US espionage charges and an uncertain future in exile.

What drove Snowden to sacrifice himself? Award-winning Guardian journalist Luke Harding answers the question which should trouble every citizen of the internet age.

The Collapse of Globalism

On Fire: The Burning Case for a Green New Deal