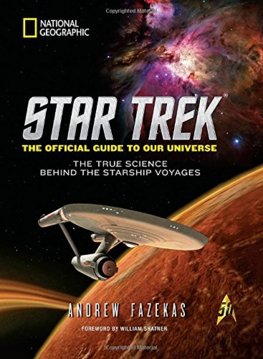 Star Trek The Official Guide to Our Universe

A big, beautiful beginner's guide to the cosmos - planets, stars, galaxies, and beyond - through the Star Trek lens. For the science enthusiasts among Star Trek fans and the parents looking for gift books that offer education with entertainment. As Star Trek celebrates its 50th anniversary, this book reveals the real science behind its fantastic and beloved fictions, inviting readers to step outside, gaze up at the night sky, and observe some of the destinations the Starfleet has visited. Many of the galactic destinations featured in Star Trek over the years - multiple star systems, alien worlds, supernova explosions, emission nebulae, voracious black holes - are scientifically valid, so much so that one can step out and view them in the night sky. In this book astronomy educator Andrew Fazekas, "The Night Sky Guy," takes you on that journey, starting with specific Star Trek voyages, explaining the science behind them, and guiding you in observing and learning more about the real-universe corollaries of planets and places in the Star Trek universe.

The Ends of the World Volcanic Apocalypses, Lethal Oceans and Our Quest to Understand Earth’s Past Mass Extinctions

The Book of Why