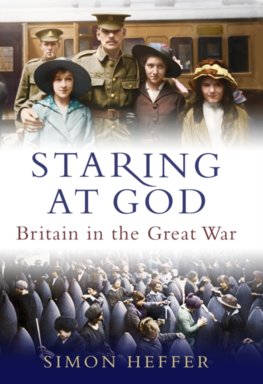 Staring at God: Britain in the Great War

The Great War evokes images of barbed wire and mud-filled trenches, and of the carnage of the Somme and Passchendaele, but it also involved change on the home front on an almost revolutionary scale. In his hugely ambitious and deeply researched new book, Simon Heffer explores how Britain was drawn into this slaughter, and was then transformed to fight a war in which, at times, its very future seemed in question. After a vivid account of the fraught conversations between Whitehall and Britain's embassies across Europe as disaster loomed in July 1914, Heffer explains why a government so desperate to avoid conflict found itself championing it.

He describes the high politics and low skulduggery that saw the principled but passive Asquith replaced as prime minister by the unscrupulous but energetic Lloyd George; and he unpicks the arguments between politicians and generals about how to prosecute the war, which raged until the final offensive. He looks at the impact of four years of struggle on everyday life as people sought to cope with dwindling stocks of food and essential supplies, with conscription into the Army or wartime industries, with air-raids and with the ever-present threat of bereavement; and, in Ireland, with the political upheaval that followed the Easter Rising. And he shows how, in the spring of 1918, political obstinacy and incompetence saw all this sacrifice almost thrown away.

Throughout, he complements his analysis with vivid portraits of the men and women who shaped British life during the war - soldiers such as Lord Kitchener, politicians such as Churchill, pacifists such as Lady Ottoline Morrell, and overmighty subjects such as the press magnate Lord Northcliffe. The result is a richly nuanced picture of an era that endured suffering and loss on an appalling scale but that also advanced the emancipation of women, notions of better health care and education, and pointed the way to a less deferential, more egalitarian future.

How the French Won Waterloo - or Think They Did