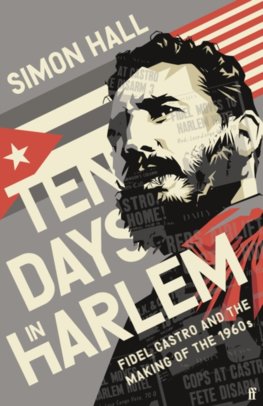 Simon Hall
Fidel Castro and the Making of the 1960s
21,95 €
Momentálne nedostupné

Rising star Simon Hall captures the spirit of the 1960s in ten days that revolutionised the Cold War: Fidel Castro's visit to New York. 'Hall has captured this catalytic moment like no one before. Anyone interested in the "Global Sixties" must read Ten Days in Harlem.' Van E.

Gosse, Professor of History, Franklin & Marshall College***New York City, September 1960. Fidel Castro - champion of the oppressed, scourge of colonialism, and leftist revolutionary - arrives for the opening of the United Nations General Assembly. His visit to the UN represents a golden opportunity to make his mark on the world stage.

Fidel's shock arrival in Harlem is met with a rapturous reception from the local African American community. He holds court from the iconic Hotel Theresa as a succession of world leaders, black freedom fighters and counter-cultural luminaries - everyone from Nikita Khrushchev to Gamal Abdel Nasser, Malcolm X to Allen Ginsberg - come calling. Then, during his landmark address to the UN General Assembly - one of the longest speeches in the organisation's history - he promotes the politics of anti-imperialism with a fervour, and an audacity, that makes him an icon of the 1960s.

In this unforgettable slice of modern history, Simon Hall reveals how these ten days were a foundational moment in the trajectory of the Cold War, a turning point in the history of anti-colonial struggle, and a launching pad for the social, cultural and political tumult of the decade that followed.

An Underground Guide to Sewers

The Descent of Man