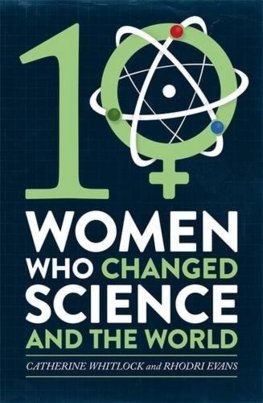 Ten Women Who Changed Science, and The World

en Women Who Changed Science tells the moving stories of the physicists, biologists, chemists, astronomers and doctors who helped to shape our world with their extraordinary breakthroughs and inventions, and outlines their remarkable achievements.

These scientists overcame significant obstacles, often simply because they were women their science and their lives were driven by personal tragedies and shaped by seismic world events. What drove these remarkable women to cure previously incurable diseases, disprove existing theories or discover new sources of energy? Some were rewarded with the Nobel Prize for their pioneering achievements - Madame Curie, twice - others were not and, even if they had, many are not household names.

Despite living during periods when the contribution of women was disregarded, if not ignored, these resilient women persevered with their research, whether creating life-saving drugs or expanding our knowledge of the cosmos. By daring to ask 'How?' and 'Why?' and persevering against the odds, each of these women, in a variety of ways, has made the world a better place.

Henrietta Leavitt (United States of America) (1868-1921) - discovered the period-luminosity relation(ship) for Cepheid variable stars, which enabled us to measure the size of our Galaxy and the Universe.

Cecilia Payne-Gaposchkin (United Kingdom/United States of America) (1900-1979) - showed that the Sun, and hence the Universe, is composed mainly of hydrogen.

Lise Meitner (Austria) (1878-1968) - fled Nazi Germany in 1938, taking with her the experimental results which showed that she and Otto Hahn had split the nucleus and discovered nuclear fission.

Chien-Shiung Wu (United States of America) (1912-1997) - Chinese-American who disproved one of the most accepted 'laws of nature', that not all processes can be mirrored. She showed that the 'law of parity', the idea that a left-spinning and right-spinning sub-atomic particle would behave identically, was wrong.

Marie Curie (France) (1867-1934) - the only person in history to have won Nobel prizes in two different fields of science.

Dorothy Crowfoot Hodgkin (United Kingdom) (1910-1994) - British chemist who won the Nobel prize for Chemistry in 1964. Among the most prominent of a generation of great protein crystallographers. The field was revolutionized under her. She pioneered the X-ray study of large molecules of biochemical importance: the structures of cholesterol, penicillin, vitamin B12 and insulin, leading to DNA structure analysis by Franklin etc.

Gertrude Elion (United States of America) (1918-1999) - won the Nobel Prize for Physiology/Medicine in 1988 for developing some important principles for drug development.

Elsie Widdowson (United Kingdom) (1906-2000) - a pioneer of the science of nutrition who was instrumental in devising the WW2 diet, in part through self-experimentation.

The Power and the Story