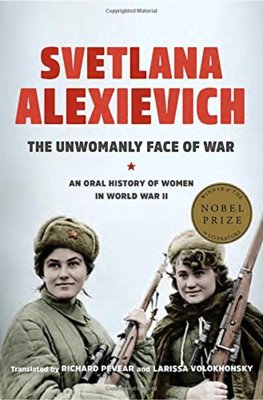 "A landmark."--Timothy Snyder, author of On Tyranny: Twenty Lessons from the Twentieth Century

For more than three decades, Svetlana Alexievich has been the memory and conscience of the twentieth century. When the Swedish Academy awarded her the Nobel Prize, it cited her invention of "a new kind of literary genre," describing her work as "a history of emotions . . . a history of the soul."

In The Unwomanly Face of War, Alexievich chronicles the experiences of the Soviet women who fought on the front lines, on the home front, and in the occupied territories. These women--more than a million in total--were nurses and doctors, pilots, tank drivers, machine-gunners, and snipers. They battled alongside men, and yet, after the victory, their efforts and sacrifices were forgotten.

Alexievich traveled thousands of miles and visited more than a hundred towns to record these women's stories. Together, this symphony of voices reveals a different aspect of the war--the everyday details of life in combat left out of the official histories.

Translated by the renowned Richard Pevear and Larissa Volokhonsky, The Unwomanly Face of War is a powerful and poignant account of the central conflict of the twentieth century, a kaleidoscopic portrait of the human side of war.

"But why? I asked myself more than once. Why, having stood up for and held their own place in a once absolutely male world, have women not stood up for their history? Their words and feelings? They did not believe themselves. A whole world is hidden from us. Their war remains unknown . . . I want to write the history of that war. A women's history."--Svetlana Alexievich

THE WINNER OF THE NOBEL PRIZE IN LITERATURE
"for her polyphonic writings, a monument to suffering and courage in our time."

"A monument to courage . . . It would be hard to find a book that feels more important or original. . . . Alexievich's account of the second world war as seen through the eyes of hundreds of women is an extraordinary thing. . . . Her achievement is as breathtaking as the experiences of these women are awe-inspiring."--The Guardian

"Magnificent . . . Alexievich charts an extraordinary event through intimate interviews with its ordinary witnesses. . . . After decades of the war being remembered by 'men writing about men, ' she aims to give voice to an aging generation of women who found themselves dismissed not just as storytellers but also as veterans, mothers and even potential wives. . . . Distilling her interviews into immersive monologues, Alexievich presents less a straightforward oral history of World War II than a literary excavation of memory itself."--The New York Times Book Review

"A remarkable project . . . Women did everything--this book reminds and reveals. They learned to pilot planes and drop bombs, to shoot targets from great distances. . . . Alexievich has turned their voices into history's psalm."--The Boston Globe

"Harrowing and moving . . . Alexievich did an enormous service, recovering these stories. . . . The Unwomanly Face of War tells the story of these forgotten women, and its great achievement is that it gives credit to their contribution but also to the hell they endured."--The Washington Post

Why They Marched: Untold Stories

Earth and I ,Lovelock