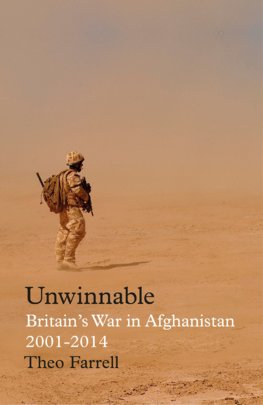 It could have been a very different story.

British and US forces could have successfully withdrawn from Afghanistan in 2002, having done the job they set out to do: to defeat al-Qaeda and stop it from launching further terrorist attacks against the West. Instead, British troops became part of a larger international effort to stabilise the country. Yet over the following thirteen years the British military paid a heavy price for their presence in Helmand province; and when Western troops departed from Afghanistan in 2014, they had failed to stop a Taliban resurgence.

In this magisterial study, Theo Farrell explains the origins and causes of the war, providing fascinating insight into the British government’s reaction to 9/11 and the steps that led the British Army to Helmand. He details the specific campaigns and missions over the subsequent years, revealing how the military’s efforts to create a strategy for success were continually undermined by political realities in Kabul and back home. And he demonstrates conclusively that the West's failure to understand the dynamics of local conflict in the country, and to tackle Afghan government corruption, meant that the war was unwinnable.

Drawing on unprecedented access to military reports and government documents, as well as hundreds of interviews with Western commanders, senior figures in the Taliban, Afghan civilians and British politicians, Unwinnable is an extraordinary work of scholarship. Its depth of analysis, scope and authority make it the definitive history of Britain’s War in Afghanistan.

The Iraq War: An Oral History

A Field Guide To Getting Lost

Strangers in Our Midst: The Political Philosophy of Immigration

The Last of the Tsars