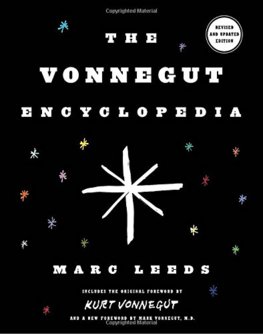 Now expanded and updated, this authorized compendium to Kurt Vonnegut s novels, stories, essays, and plays is the most comprehensive and definitive edition to date.

Over the course of five decades, Kurt Vonnegut created a complex and interconnected web of characters, settings, and concepts. Few modern writers have left behind such a large and inventive body of work. The Vonnegut Encyclopedia is an exhaustive guide to this beloved author s world, organized in a handy A-to-Z format.

The first edition of this book covered Vonnegut s work through 1991. This new and updated edition incorporates his writing through his death, in 2007. Marc Leeds, founder and president of the Kurt Vonnegut Society and a longtime personal friend of the author s, has devoted more than twenty-five years of his life to cataloging the Vonnegut cosmos from the birthplace of Kilgore Trout (Vonnegut s sci-fi writing alter ego) to the municipal landmarks of Midland City (the midwestern metropolis that supplies the setting for Vonnegut s 1973 masterpiece Breakfast of Champions and, later, the locale for neutron-bombing in Deadeye Dick).

The Vonnegut Encyclopedia identifies every major and minor Vonnegut character (from Celia Aamons to Zog), as well as recurring images and relevant themes from all of Vonnegut s works, including his revisionist libretto for Stravinsky s opera L Histoire du soldat or his 1980 children s book Sun Moon Star. Leeds provides expert notes explaining the significance of many items, but relies primarily on extended quotations from Vonnegut himself. A work of impressive scholarship in an eminently browsable package, this encyclopedia reveals countless connections readers may never have thought of on their own.

A rarity among authors of serious fiction, Kurt Vonnegut has always inspired something like obsession in his most dedicated fans. The Vonnegut Encyclopedia is an invaluable resource for readers wishing to revisit his fictional universe and those about to explore it for the first time.

Short Stories in French for Beginners