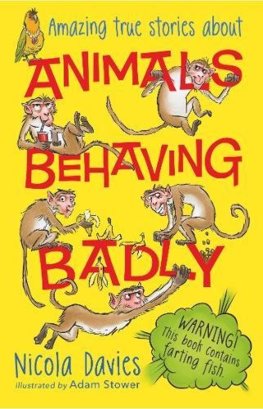 From award-winning children's author and biologist Nicola Davies, this is a collection of funny, fascinating and true stories about animals "behaving badly" - which is to say, getting the better of us human beings! We start with the wolverine in Canada, who will trash your home and everything in it, and then meet the kea in New Zealand - park your car in kea country, and you'll find out the hard way that these clever birds have sharp beaks and a love of mischief. Next we visit India and learn about macaque monkeys, who have shoplifting, highway robbery and baby-snatching on their impressive rap sheet, before jetting off to the US. In Florida we find drumfish, whose strange humming calls will keep you up all night long, and in Alaska Sitka whales, who gang up to steal thousands of dollars' worth of cod from under the noses of fishermen. The book ends on a charming high, as Nicola describes two creatures that work together with humans: little brown birds that help us collect honey in East Africa, and bottlenose dolphins that help fishermen catch mullet in Brazil. With lively illustrations from rising talent Adam Stower, Animals Behaving Badly is a splendidly witty and original take on narrative non-fiction for younger readers.

King of the Sky

The Dollmaker of Krakow

The Quiet At The End of The World