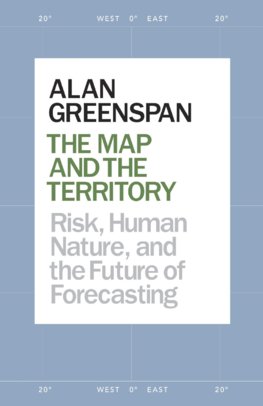 Map and the Territory

Like all of us, though few so visibly, Alan Greenspan was forced by the financial crisis of 2008 to question some fundamental assumptions about risk management and economic forecasting. No one with any meaningful role in economic decision making in the world saw beforehand the storm for what it was. How had our models so utterly failed us?

To answer this question, Alan Greenspan embarked on a rigorous and far-reaching examination of how Homo economicus predicts the economic future, and how it can predict it better. Economic risk is a fact of life in every realm, from home to business to government at all levels. Whether we're conscious of it or not, we make wagers on the future virtually every day, one way or another. Very often, however, we're steering by out-of-date maps, when we're not driven by factors entirely beyond our conscious control.

The Map and the Territory smartly updates our forecasting conceptual grid. It integrates the history of economic prediction, the new work of behavioural economists and the fruits of the author's own remarkable career to offer a thrillingly lucid and empirically based grounding in what we can know about economic forecasting and what we can't. The book explores how culture is and isn't destiny and probes what we can predict about the world's biggest looming challenges, from debt and the reform of the welfare state to natural disasters in an age of global warming.

ALAN GREENSPAN was born in 1926 and reared in the Washington Heights neighborhood of New York City. After studying the clarinet at Juilliard and working as a professional musician, he earned his B.A., M.A., and Ph.D. in economics from New York University. In 1954, he cofounded the economic consulting firm Townsend-Greenspan & Co. From 1974 to 1977, he served as chair of the Council of Economic Advisers under President Gerald Ford. In 1987, President Ronald Reagan appointed him chairman of the Federal Reserve Board, a position he held until his retirement in 2006.

He is the author of the number one International bestseller The Age of Turbulence.

Look Up: Our Story With The Stars

Not In Your Genes

Whats Really Happening to Our Planet