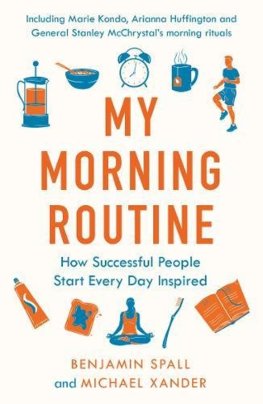 How are you spending your most valuable hours? The first few choices you make every morning can unlock greater productivity, creativity, and calm - or bring out your worst self.

Marie Kondo performs a quick tidying ritual to quiet her mind before leaving the house. The President of Pixar and Walt Disney Animation Studios, Ed Catmull, mixes three shots ofespresso with three scoops of cocoa powder and two sweeteners. Retired U.S.Army Four-Star General Stanley McChrystal works out at 4am everyday for at least an hour.

Part instruction manual, part inspiring diary, My Morning Routine interviews 64 of today's most successful people - including Biz Stone (Twitter co-founder), Arianna Huffington (
The Huffington Post founder), and Michael Acton-Smith (CEO of CALM) - and offers advice on creating a routine of your own.

Some routines are all about early-morning exercise and Spartan living; others are more leisurely and self-indulgent. What they have in common is they don't feel like a chore. Once you land on the right routine, you'll look forward to waking up.

Whether you want to boost your productivity,implement a workout or meditation routine, or learn to roll with the punches inthe morning, this book has you covered.

Mastering the Art of Negotiation

How To Build It

The New Urban Crisis Gentrification, Housing Bubbles, Growing Inequality, and What We Can Do About It