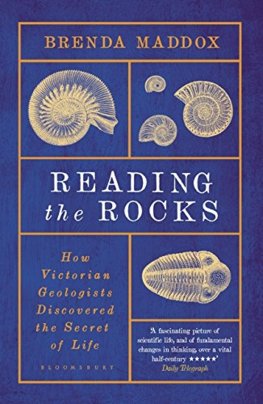 A rich and exuberant group biography of the first geologists, the people who were first to excavate from the layers of the world its buried history.

These first geologists were made up primarily, and inevitably, of gentlemen with the necessary wealth to support their interests, yet boosting their numbers, expanding their learning and increasing their findings were clergymen, academics - and women. This lively and eclectic collection of characters brought passion, eccentricity and towering intellect to geology and Brenda Maddox in Reading the Rocks does them full justice, bringing them to vivid life.

The new science of geology was pursued by this assorted band because it opened a window on Earth's ancient past. They showed great courage in facing the conflict between geology and Genesis that immediately presented itself: for the rocks and fossils being dug up showed that the Earth was immeasurably old, rather than springing from a creation made in the six days that the Bible claimed. It is no coincidence that Charles Darwin was a keen geologist.

The individual stories of these first geologists, their hope and fears, triumphs and disappointments, the theological, philosophical and scientific debates their findings provoked, and the way that as a group, they were to change irrevocably and dramatically our understanding of the world is told by Brenda Maddox with a storyteller's skill and a fellow scientist's understanding. The effect is absorbing, revelatory and strikingly original.

A History of Modern Britain

The Complete Book of Jaguar: Every Model Since 1935