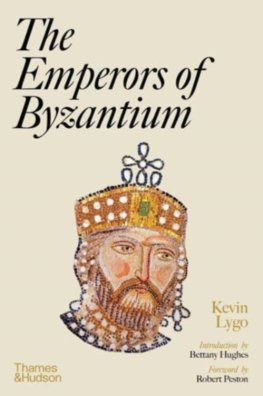 The Emperors of Byzantium

A compelling and vivid narrative history of one of the founding civilizations of the modern world, the Byzantine empire, evocatively told through the lives of its 92 emperors. The Byzantine empire was one of the most successful states of the Middle Ages, ruling over a huge terrain straddling Europe and western Asia for an unrivalled eleven hundred years. Yet its history remains largely unfamiliar.

This chronicle brings this majestic yet turbulent period to life through the lives of its emperors: supreme military commander, Head of State and God's representative on earth, no less. These were the men and women that presided over many of the foundations of the modern world, from the establishment of the Eastern Orthodox Christian faith, to the magnificent artistic heritage of Hagia Sophia and Mount Athos, and the creation of a visual template for Christian art. Each illustrated biographical entry contributes to the story of how Byzantium shaped our art, culture, religious beliefs and justice systems, and the role this extraordinary empire played in halting repeated invasions, allowing the idea of 'Europe' to flourish.

Through stories of nobility and petty revenge, of religious devotion and brutal genocide, and of sexual intrigue and artistic brilliance; from soaring intellectuals to illiterate peasants, eunuchs and despots, this is a humanizing portrayal of individuals, whose role impacted the lives of millions.

The Gate To China: A New History Of The People’s Republic & Hong Kong

100 Documents That Changed the World

Too Big To Walk: The New Science Of Dinosaurs

An Illustrated History of Equestrian Sports